I signed up as a GOP convention blogger, even though I'm unsure whether the GOP and I agree on what that means.

My plan would be to roam the back rooms and events to observe, Matt Labash-style, the people and goings-on, with the trust that I'm not out to embarrass the party or anyone in it, but to pick up interesting and preferably funny stories for my readers.

So far, there's no sign of that in the offing. They've sent me a string of ordinary press releases, to wit:

One of these came with the admonition, "Havenâ€™t pushed this out yet, but will within the hourâ€¦feel free to blog awayâ€¦"

i don't envy their communications guy, whose job is to figure out what bloggers want to write about and lead them to it.

Bloggers are odd birds, and what little I know about them boils down to:

The very last kind of writing that interests me (and, I believe, you) is advance pieces about an event whose outcome is a foregone conclusion. If I can't find something that lets me tell a Rittenhouse-style story, I'm not obligated to write anything at all.

But that does not mean I can't be a convention blogger.

Here's what I would like to write about a GOP gathering. (This one, of course, has already happened.)

my involvement with the '84 convention began with a call from my sister, who had contacts in the party looking for volunteers. I drove three hours from Austin to Dallas for a meeting that lasted 25 minutes.

In it, Secret Service advised us that if we were chosen for motorcade duty, we would be expected to show up every day in a three-piece wool suit.

One of us mustered the courage to ask, "In Dallas?"

That summer turned out among the hottest on record. Trammel Crow had just finished constructing his flagship Loews Anatole hotel, a sprawling, three-towered, Turkish-themed red granite plaza where the Reagans and Bushes would stay. Its air conditioning wasn't quite up to task yet, and the enormous atria peaked every day right about 80 degrees; we drivers learned to roost outside the Picadilly ballroom in a wide, low-ceilinged, windowless hallway lined with cool marble tile.

I'd imagined in a scene of civil unrest and/or lawlessness, I wouldâ€”with no further commentâ€”floor the accelerator.

I say "roost" because most of what we did all day was wait. The whole idea of a motor pool is to have plenty of drivers on-call. So most on-call time was off-call, in between assignments. All day from our circle of sofas, we enjoyed watching the volunteer girls walk past, and this was the first realization I had that women's clothing designed for a slimming effect works pretty well until it moves.

I've already written about our typical daytime adventures here. At night, we made our own amusement.

As I knew from my chauffeuring days, waiting outside a restaurant while your guests fill themselves is just about the dullest job available. That's where I found myself with three other drivers, all SMU frat boys who knew their way around town and had even less tolerance for boredom than I. We'd just let our people out for dinner at Patrizio's in Highland Park Village, and we agreed that standing around a parking lot was no way to spend the next 2Â½ hours.

After we piled into one car and nabbed a 12-pack at a convenience store, one of the guys suggested we venture over to the Trinity River bottom, where hundreds of Reagan-hating activists had been corralled. "I want to see protesters," he insisted, until the rest of us shrugged and went along.

the river bottom is a flat floodway about 15 times wider than the actual Trinity, which is a dribble comprising mostly storm-sewer runoff and effluent from Fort Worth. The bottomland is so dry most of the time that you can drive on it in a passenger car, though no one does because there's nothing to see between the levees.

Except in the summer of 1984. With the President in town and no chance of a late-August flood, someone had set up a protesters' confab down there on the free real estate. It took the form of enormous revival tents laid out like a checkerboard, surrounded by RVs and assorted campsites constructed according to how much heat the protesters were willing to suffer.

We drove our dark-gray Oldsmobile 98 over the levee and down alongside an area crawling with tie-dyed hippies, aggrieved Third World wannabes, and women who, on principle, wore no makeup. One of these was the first to notice four white guys in suits squeezing between the tents in a luxury sedan, and signaled us to stop.

"What are you guys doing here?"

"We live here. We wanted to see the protests."

"You're not supposed to be driving here," she said, gesturing in front of us to the space between the tents, which was about 1.0002 Oldsmobiles wide. A black man in clerical garb joined her, as did a wrinkled old dude in a psychedelic T-shirt whose hair and beard looked to comprise about half his body weight.

"Is this where the protests are?" another of our guys chimed in. This, I later learned, was a frat-boy sport called "playing dumb." The minister's neck stiffened.

"You shouldn't have a car here," the woman shook her head, hoisting a two-way radio to her ear. More people appeared. Apparently we'd attracted the camp's leading citizens first, and more would follow.

"Is it all right if we have a look around? We live here." Our driver had no fear.

The minister cleared his throat and spoke up.

"You need to go that way," he said, gesturing ahead, "then turn right and go up the ramp. There's no room for car traffic down here."

I stabbed the brakes, threw the car into Park, and came out of the door.

At this point I realized the vehicle was surrounded on three sides, which I'd always imagined to be the point at which, in a scene of civil unrest and/or lawlessness, I wouldâ€”with no further commentâ€”floor the accelerator so as to avoid casualty status. We were completely outnumbered, and although there were no signs of imminent violence, I sensed that these people were onto us and if we failed to exit as instructed very soon, we could tempt them to urge us along with dirt clods, spit, and other sticky projectiles we'd be hard-pressed to explain to our passengers, who were, by the way, just finishing up dinner on the other side of town.

"That way?" our driver played dumb a little more.

"That way," the minister said flatly, and began walking ahead of us. He waved us on, and I guess we figured that defying him would expose us to mob rule, so we rolled up our windows and waved good-bye to the crowd.

on the tollway back toward the restaurant, one of the frat boys quizzed me as to what I knew about the various fraternities at UT. I professed total ignorance, and when the other guys heard, they stopped talking to me.

That was my first exposure to the slyness of snobbery, where you look down on someone without actually appearing to do so. He had asked "What are the Tekes like at UT?" not "Are you a Teke?" So if I didn't know the answer to the first question, he didn't need to ask the second, which would have advertised his status a bit too directly.

enough of us worked hard at the convention that none of that mattered. These were 18-hour days, no exaggeration. I left my parents' house in Richardson at 6 a.m. and returned at midnight, four days straight.

My pinnacle assignment was driving Lyn Nofziger from the Anatole to the convention center one morning. He said little on the 10-minute trip, going through his papers most of the way, but I knew who he was from his high profile as Reagan's spokesman and felt honored to serve him.

As I let Nofziger out near the hall, someone in a small band of picketers recognized him and egged his fellows into spoiling for a confrontation. With 50 feet to walk from the car to the entrance, Nofziger was going to have a difficult time getting past them. When I saw this, something visceral caused me to stab the brakes, throw the car into park, and come out of the door. The picketers stopped short and fell silent. Nofziger turned, nodded toward me, and went on his way.

I have the sort of look that convinced Oliver Stone to cast me, with one passing glance, as a Secret Service agent in JFK.

The simple explanation for the easy face-down is, I have the sort of look that convinced Oliver Stone to cast me, with one passing glance, as a Secret Service agent in JFK. At nearly six feet with a dark suit and aviator glasses, I must have made the same impression on the convention-hall protesters, and rather than risk a dozen more just like me coming out of thin air to put them on ice for a week, they retreated.

Later that day, I had the good fortune to be sent out for Nofziger's return to the Anatole. As we arrived, he said "Thank you," and handed me a lapel pin.

I later learned it was a staff pin, and it tells Secret Service that its bearer is an administration official who does not need to be challenged in secure areas. Which is why, before he left the car, he added, "Be careful where you wear that." 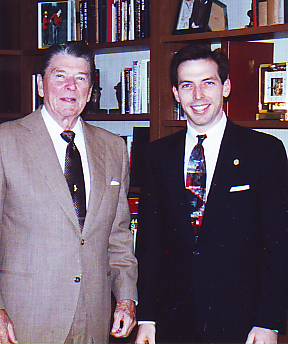 Michael, this was a fun read.  Started the '84 convention planning to earn college credit in a multi-day symposium which cost over $1,000 if my recollection is serving me well tonight.  Anyway, on the 1st full day we received a pitch (seated, student-style) about the merits of being a college Republican from a mostly UT group that was in town barnstorming.  I sort of signed up and was a Fritzbuster before the sun had set.

We sold thousands of t-shirts and worked on training teens to be semi-spontaneous during the cheer parts of convention speeches.  Bullying our way into VIP events after arriving in an ambulance wearing khaki jumpsuits was the peak of that hot, hot week.  The nights were unspeakably fun.

Not having enough of a formal experience inspired me to sign up for the Quayle motorcade in Houston in '92.  You're right: waiting for your charge to get full is bad, but being invited to the table to listen to Bill Kristol talk shop about the convention was surreal - and uncomfortable.