I finally delved into Reclaiming History, Vincent Bugliosi's exhaustive history on the JFK assassination, and I hope its publication means we're finally done with this whole conspiracy business.

In sum: All the circumstantial evidence points toward a malajusted 24-year-old Lee Harvey Oswald firing three shotsâ€”the last one fatalâ€”from the sixth floor of the Texas School Book Depository.

And that's it. All other claims rely on dubious characters, shifting accounts, and "what if" scenarios.

Furthermore, conspiracy theoristsâ€”to a manâ€”when confronted with actual evidence, invariably say, "Well, that was faked." Not "Here's contradictory evidence," but, "They're lying." Then they go on to spiel their favorite, unsubstantiated fantasy.

Before anyone seizes on the term "circumstantial" above, let me note that almost every murder conviction is decided on circumstantial evidence. Premeditating killers usually make sure there are no eyewitnesses. Once you establish motive, means, and opportunity, you pretty much have your perpetrator. That's all most juries see, and that's all that you need to convince 12 impartial people to vote for a conviction. And, they're almost always right.

had i known all this in 1991, when I accepted an index card marked "SS" from Oliver Stone's assistant, then took his production company's invitation to audition for a speaking part in JFK, I probably would've been dismissed after a few days for continously smirking on the set. 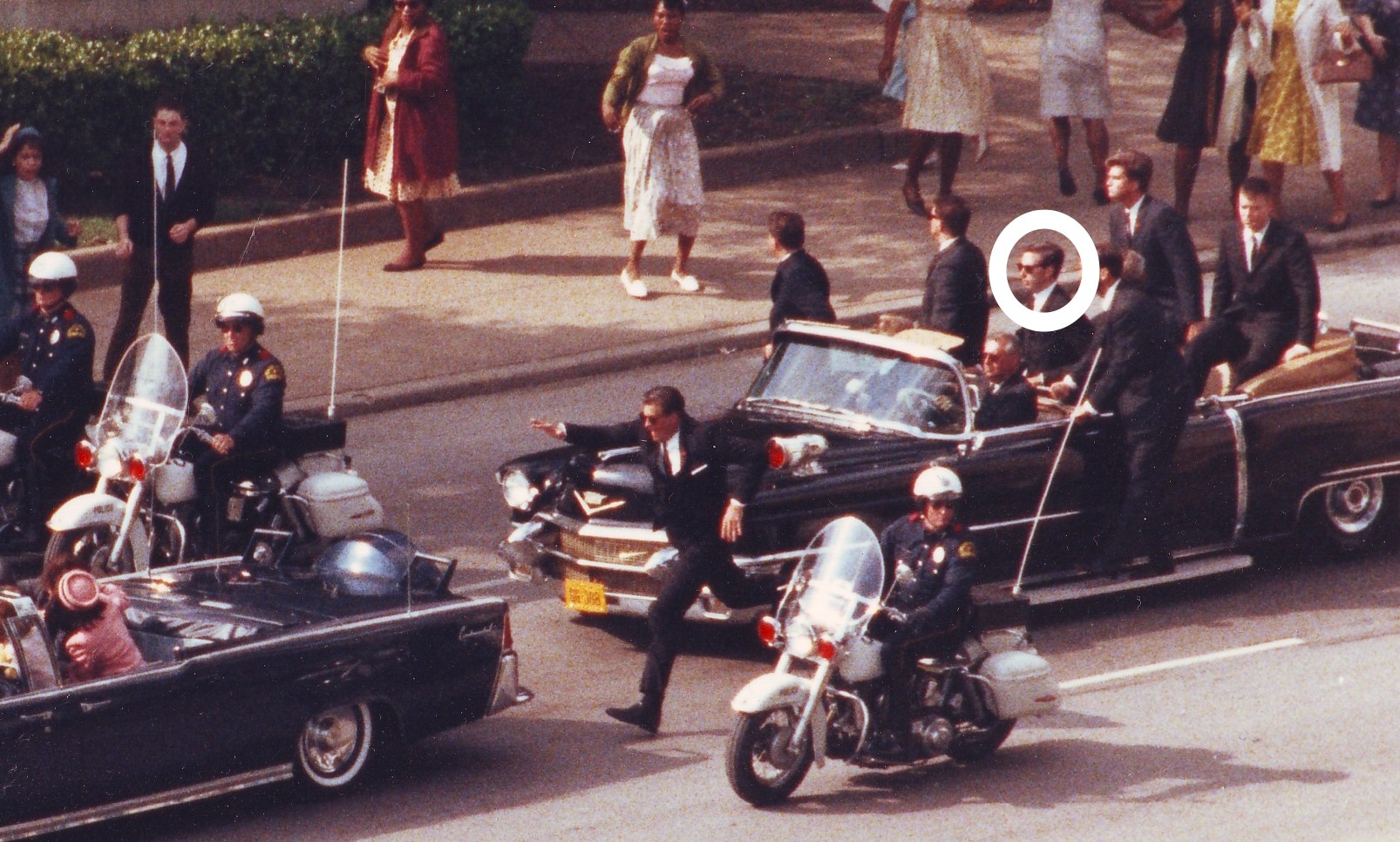 (If you can't part of history, at least be part of fake history.)

The speaking role didn't quite materialize (someone delivered the line, "Secret Service, ma'am, you're coming with us" more effectively than I), so, for the parting gift, I joined hundreds of other would-be actors standing by in a warehouse for our call-in to re-enact the JFK assassination in Dealey Plaza. I seem to look the part of a Secret Service agent, so that's where they put me.

Over two weeks, we ran the motorcade sequence 32 times, at various intervals changing camera angles and experimenting with different methods of simulating the explosion of President John F. Kennedy's skull.

For several runs, they duct-taped blood packs to the car just behind the actor's head, with a radio-controlled charge beneath. Other times, they pressed a toupeÃ© to his head and ran hoses from beneath it to a goo-filled tank.

From the perspective of the Secret Service on the chase car, the blood packs were our favorite special effect. (I know this is gallows humor, but indulge me.) When the packs exploded, a shower of red corn syrup erupted, dousing us all with a sugary mist. By the time our vehicles reassembled on Main Street for the next take, a carful of guys in black suits stood gingerly licking their lips, in need of a good sponging.

back to bugliosi's book. By the time he gets done chronicling Oswald's life, it's hard to feel anything but pity for the gunman. He grew up without a father, under a domineering and delusional mother, and spent all his short adult life looking for a way to wreak himself on the world.

Taken with the socialist fantasy, he first "defected" to the Soviet Union, where he found only indifference and a factory job. He took a beautiful wife, then "re-defected" to the U.S., where, once again, he found no one interested in his self-engineered drama. His feints of public sympathy toward Cuba only exposed his flaky nature, so when he learned that the President of the United States would pass unshielded by the place of his menial employment in a couple of days, he saw his chance for immortality.

His only mistake, in my estimation, was in not planning his escape. Months prior, he'd already tried to assassinate General Edwin Walker (and missed by a fluke of marksmanship), eluding suspicion only because the act was so random. Perhaps this emboldened Oswald. After killing the president, if he had simply paused for time in downtown Dallas, taken a bus to some port city, then fled to Cuba, he'd likely have been a hero of sorts to the Leninists. And, quite possibly, triggered World War III.

Instead, Oswald clumsily carried out a one-off crime, forsaking his impoverished, young family for â€¦ nothing. No fame, no money, not even personal vengeance.

The banality of Oswald's story spurs some to look for evidence that something bigger was at work. You mean no one rewarded him for his bathetic dive?

Nope. Some criminals are just that pitiful. Watch COPS some time if you need more on that.

jack ruby is more complicated. His bizarre coda to the whole episode still leaves me shaking my head. Why would a business owner throw his life away to kill some pipsqueak sure to be executed anyway?

To answer that question, you have to know Ruby, which I don't, but a poignant episode in Bugliosi's book struck me as illustrative. In the wee hours on the night after Kennedy's killing, Ruby summoned a young man living in his apartmentâ€”a photographer by tradeâ€”to the intersection of Hall St. and North Central Expressway, to take a photo. I used to live in this area, and it has never been a good place to be any time of day. In fact, I remember running the traffic light late at night so I wouldn't set myself up for a carjacking.

Anyway, Ruby called his tenant out there past midnight just to take pictures of an anti-Kennedy bill that had been posted on a building. Ruby's anguish over Kennedy's death further drove him to close his nightclub over the weekend, which is the only time most nightclubs make money. This action, which would only hurt Ruby himself, still left him unsatisfied. He needed to assuage his conscience, an underlying sense of right and wrong, which Oswald had singlehandedly defiled. The happenstance of passing, armed, right by where Oswald would be exposed in transit, matched the almost unbelievable circumstances that had Oswald employed in a warehouse along Kennedy's motorcade route, during a lunch break.

In short, Jacob Rubenstein did what many 1960s-era people wanted to do: Kill the man who'd murdered their hero.

at various moments, i looked up from reading bugliosi and pondered that the very house where I live had been standing for only seven years when Kennedy was killed a few miles away, and when that happened its occupants probably glued themselves to the radio or television for most of that day.

In the hours following, Oswald walked streets and sidewalks that still look pretty much the same as they did then. I could retrace his steps under the same oak trees that shaded him on his way. The addresses in Bugliosi's book refer to buildings that are still there. Even a few of the characters walk the earth today.

Through all this, however, President Kennedy still seems like an abstract to me. I say that not to denigrate him, but to underscore that his life ended on November 22, 1963. Meanwhile, the lives of everyone associated with his demise seem to have continued, in living color and in print.

Kennedy was a hero of World War II, a Cold Warrior, a man whose death seemed to mark the end of the placid 1950s before a turbulent and ugly decade that would rend the United States in a way that probably would have appalled him. Everyone, it seems, reads his own story into JFK's, and I'm no better. But no one disagrees that his death served as a demarcation into a postmodern era, one in which moral certainty became irrelevant, and the psychoses of deviants wrought themselves onto a nation of innocents who still reel under the burden.