One of our fellow parishioners is moving to Hawaii later this year.

I made sure she knows that anytime she wants to visit Dallas, she is welcome to stay with us!

You know, because I'm generous that way.

it's garden-building time at Rittenhouse Estates again, and God's having fun with my timing. (This will take a moment to string together, so sit down and have some patience, on the 'House.)

It began with hail, as all good biblical sagas do, a few months ago, when a hell-blast of ice balls pocked my ancient roof for the last time, and the insurers finally gave in: total loss, Mr. Rittenhouse, choose your contractor. I took the salesman who pestered me the least (there were a half-dozen of them roaming the neighborhood for weeks), and his crew made short work of my 1956-vintage cedar shake. Here's a wrapper I found in the attic. 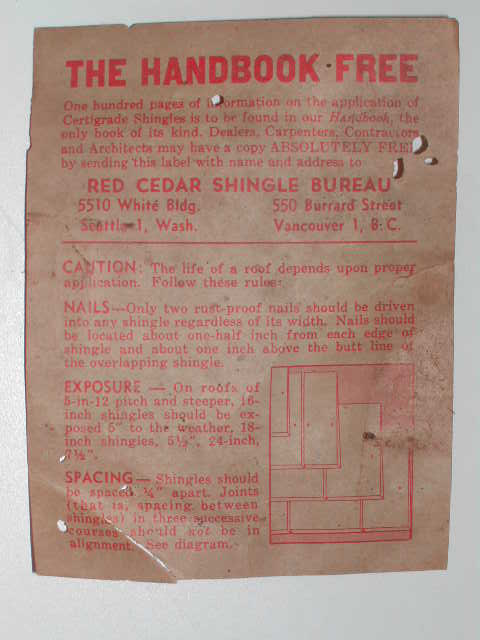 In case you don't have a telescope handy:

One hundred pages of information on the application of Certigrade Shingles is to be found in our Handbook, the only book of its kind.

Paid to write that, someone was, in such a way that you can't help reading it in the voice of John Cameron Swayze.

Dealers, Carpenters, Contractors, and Architects may have a copy ABSO-LUTELY FREE by sending this label with name and address to

A street address follows in the style of "Seattle 1, Wash." I wonder what would happen if I mailed it in today. (Of course, they'd turn me down for the free Handbook, because I'm only a Writer.)

the roofer asked if i wanted to keep the narrow trim strip just under the roofline, and I said to take it off because I've had 100 feet of guttering out in the backyard awaiting my next free weekend for almost a year. But then I knew I'd have to paint, and before painting I've always wanted to flatten out a (barely perceptible) sag over the front porch, and before I knew what I'd gotten into, I'd put new cracks in two interior walls trying to straighten the blasted roofline.

Where God's timing begins to factor is, my neighbor chose that month to build into his garage and construct a separate one out back, and his contractor inexplicably threw out several lengths of 2x12 lumber in the process. I needed something 152 inches long to brace my roof after I'd finished leveling it.

I returned from the neighbor's dumpster with a board exactly 152 inches long. Plus two others, bolted together, that I used to jack up the overhang before I screwed it all together. 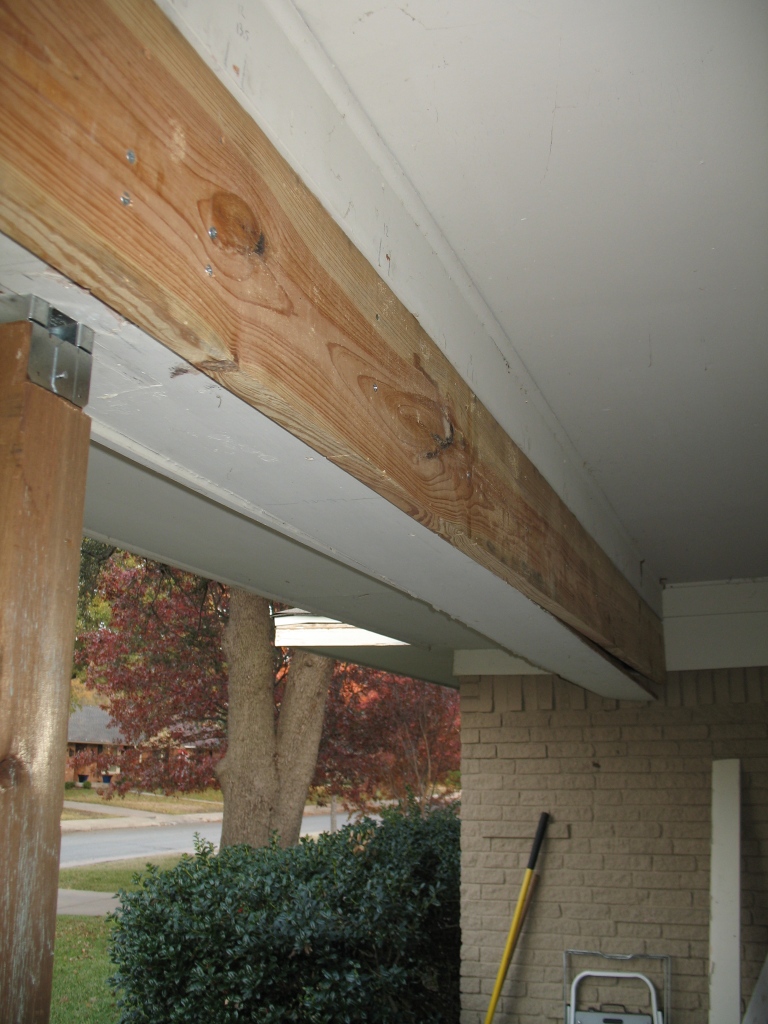 Elegant? No. But big fixes never are until you trim up the edges all pretty.

(I do regret not getting a snapshot of the two floor jacks and 4x4s I used to press this log into place. The neighbors had to look at that mess for two days.)

Then I glared at the wooden deck below. I'd laid this thing years ago, after tearing out a brick flower box, and never been satisfied with its look and feel. Pine 2x6s, stained and varathaned, they'd looked great for months until the finish evaporated and the boards' inherent springiness wore on my nerves. I wanted to re-do it with better lumber, but the cost of real redwood kept me just dreaming.

Until one Saturday when a friend called for help guiding a sewer snake under his rental house. Across the street, a building contractor was dismantling another early-'60s rambler. Not demolishing; dismantling. As he did, he'd removed a couple dozen 18-foot redwood 2x6s from the roof and laid them on the back patio. I satisfied myself picking through the dumpster for a few he'd judged substandard, and carted them home.

The next Monday, I got to wondering: What were his plans for those other boards? I drove over to find him setting the house's toilets on the driveway for salvage.

"How many you want?" he asked, and I told him I could use a dozen if they were at least 14 feet long.

That's it. No price, just take the boards. I stood there for a moment, wondering if I should pinch myself. This was probably several hundred of today's dollars' worth of premium redwood, harvested about 1959. Yes, the boards had nail holes and smelled like an attic. But I could deal with that. 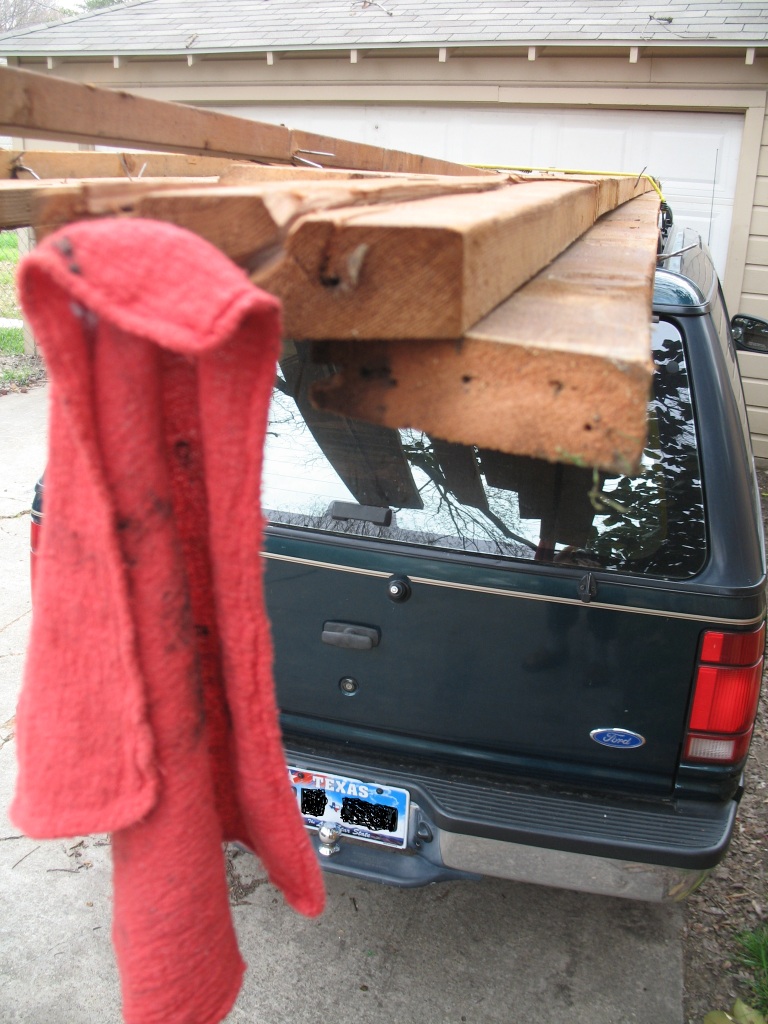 Of course, I'd be on my own for transport, and I quickly learned how to—and how not to—lift and load lumber longer than my Explorer onto its roof. The weight lent the luggage racks a precarious bow. I crept two miles back to Rittenhouse Estates with a wary eye on the bobbing ends stretched out over my front bumper.

so that's how the front deck will get rebuilt for next to nothing, with redwood replete with rusty nails from the Eisenhower Administration. Redwood being a "soft" wood, I'd still have the sag factor to consider, and here's where that timing thing appears again.

Out walking Wolf Dog one afternoon, I glanced up the driveway of an unoccupied house and spotted two concrete piers, the foot-tall, 6,000-psi cylinders they place under foundations after leveling. They sat atop dozens of neatly stacked cinder blocks, looking like the sort of clutter a new owner would pay someone to haul away.

I dialed the realtor's number and left a message, asking if the owner would let me have those piers. He called me back the next day and said, Sure, take them, and take the 72 cinder blocks under them, if you want.

Fifteen minutes later, Squeeky came home and announced we were going to reconstruct our garden using cinder blocks, if we could just find some.

So we have a new garden. 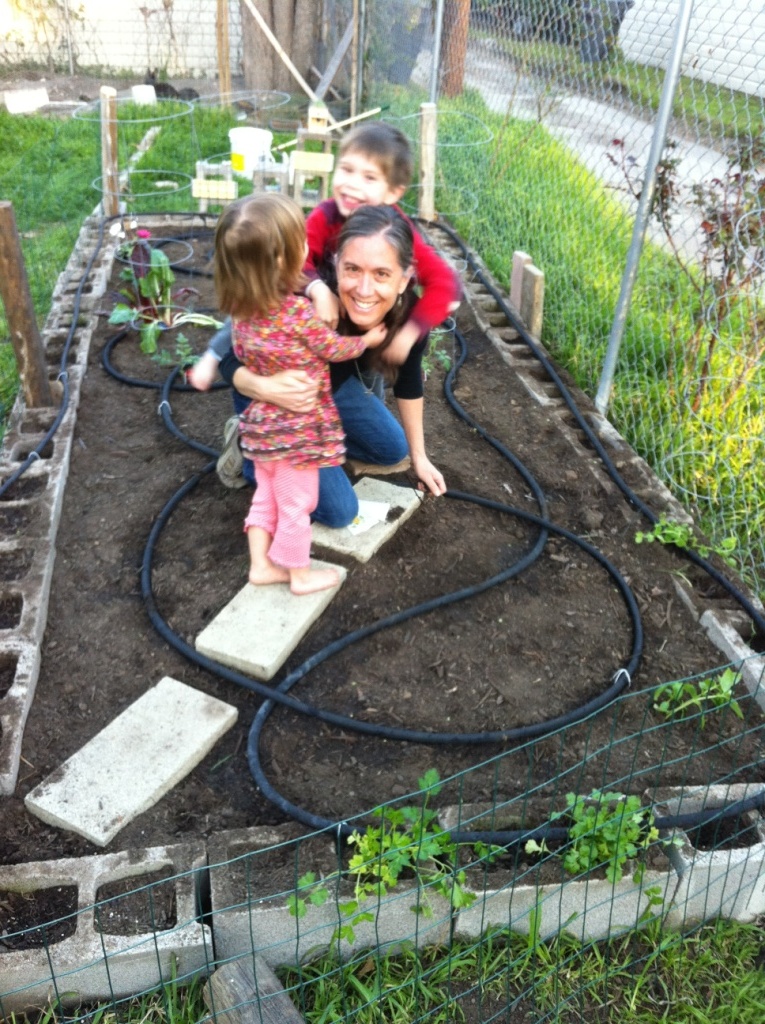 Pictures of the new deck as soon as it's finished.

1 Even tho this is a modern day tale from the big city, it reads like something out of "Farmer Boy" or "Little House on the Prairie" the way you found just what you needed by being industrious! Impressive talent to express current events without dating the material.