Actually, that should read "fatality-free." Since Little Roo's arrival three years ago, we've had two emergency-room visits after things collided with his head.

Although our safety record is otherwise superb, I do what I can to keep our insurance agent nervous.

like a couple of weekends ago, when I rented a 19-foot scissor lift to help me reach several big dead limbs hanging over the house. While I have the toughest roof in Rittenhouse Estates (two hailstorms, two denied claims), I doubt the rafters could take a 15-foot log without caving.

Several such Swords of Damocles angled precariously off the big elm out back, waiting for a pudgy sparrow to trigger cataclysm. And of course there was the great Taurus spearing of last summer to remind me how ugly things can get around here in a storm.

In nature, elm trees shed wood all the time. Higher limbs hog the sunlight, and lower limbs die and fall off. But in nature, humans live in caves rather than costly, fragile structures under 50-year-old trees. So the elm would need a trim. 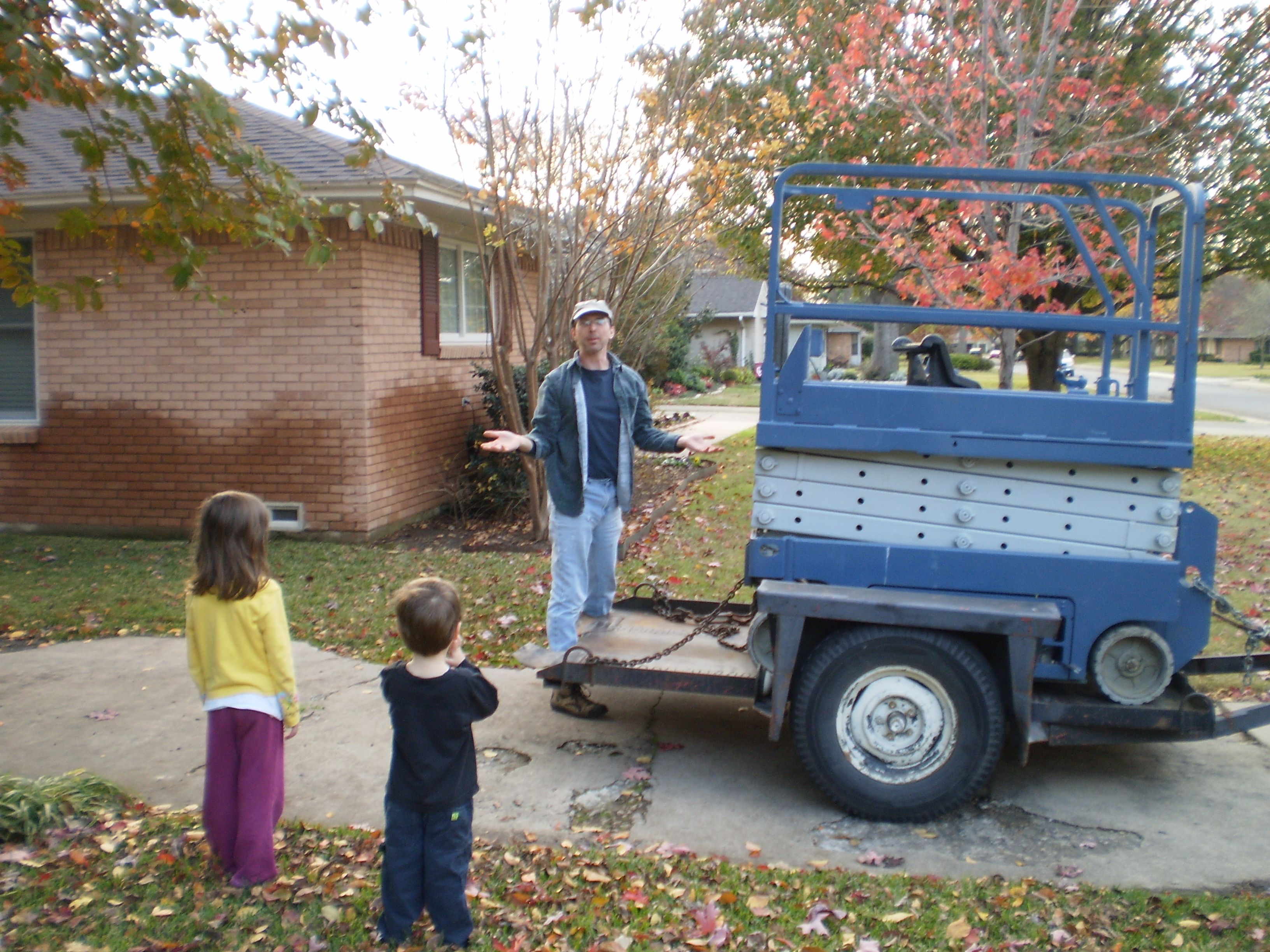 Surprisingly crude-looking, isn't it? Mechanically, it's nothing more than a hydraulic jack laid sideways between steel scissors with a platform bolted on top. For moving it around, an electric motor supplies one-wheel drive. The working floor scales to 19 feet and can extend a sort of diving board off one end. No safety belts, no cover, and no fiberglass in the structure to insulate against power lines. A tort lawyer's dream, and yet, these things are used everywhere.

The rental-yard guy showed me the buttons and, after hitching up the trailer, wished me well. No caveats, no warnings. Could it be that safe?

the answer is "no," if navigating from the trailer to the backyard proved anything. I learned too late that the controls were detachable, making this the ugliest remote-control car I've ever driven. Having the joystick with me on the ground certainly would have simplified getting through the back gate, which is exactly 1.01 scissor lifts wide. 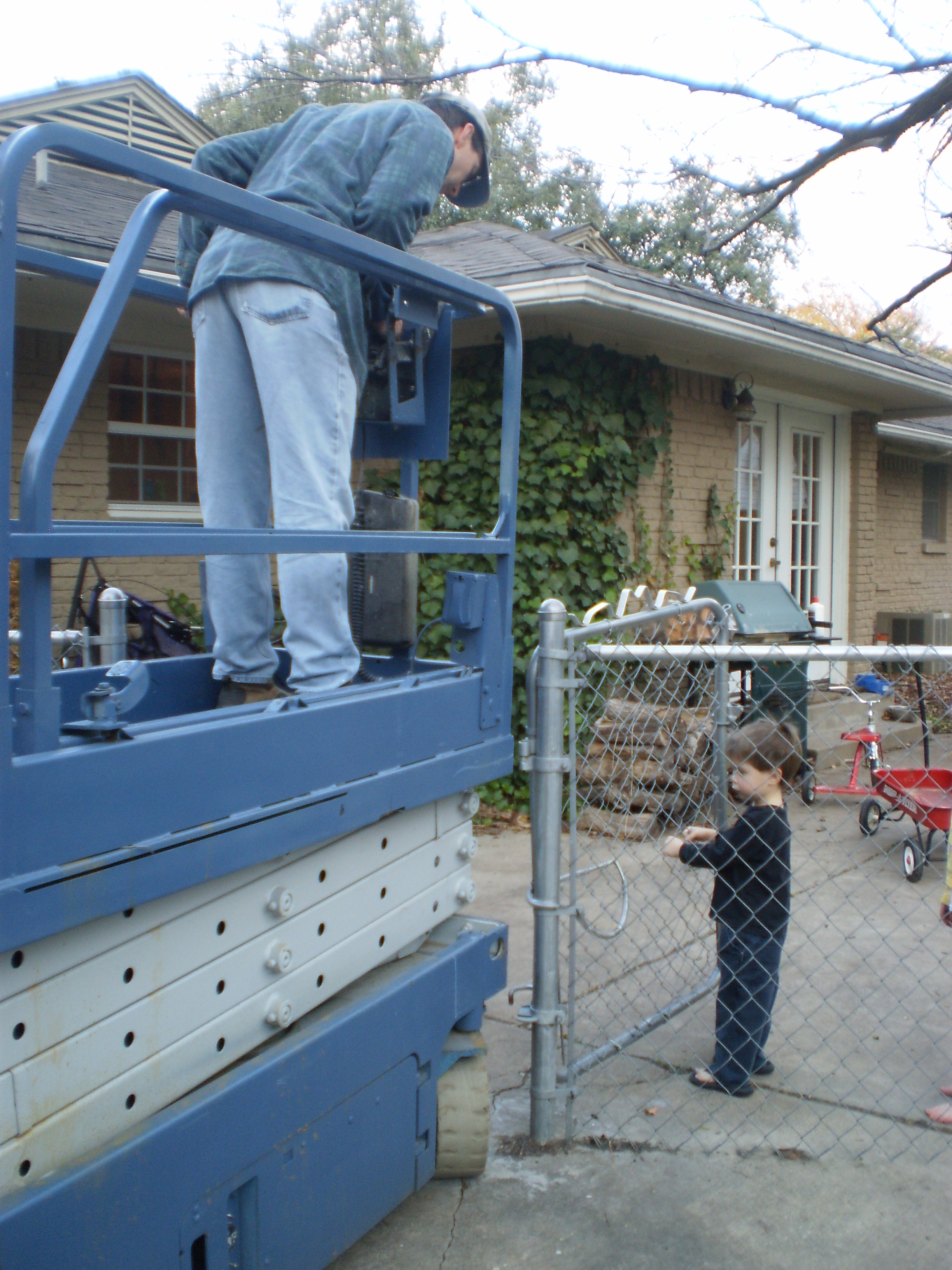 With me atop the platform, the controls worked a little too well. When I tipped the stick forward, the machine lurched ahead, pitching me so that my arm pulled back hard on the joystick, reversing power. That stopped the ride so suddenly that I toppled forward, again tipping the joystick with me. The to-and-fro grew so violent that I had to release the controls and just grab the railing until everything stopped.

Once on the patio, getting myself up into position called for the spatial thinking of an airplane pilot, so that I didn't elevate my head right into a branch, or, on the way back down, take off a rain gutter. I learned to feather the controls and take frequent looks around while moving.

But for my speed, an observer might have been hard-pressed to tell me from a professional. Except I forgot to check the weather report. 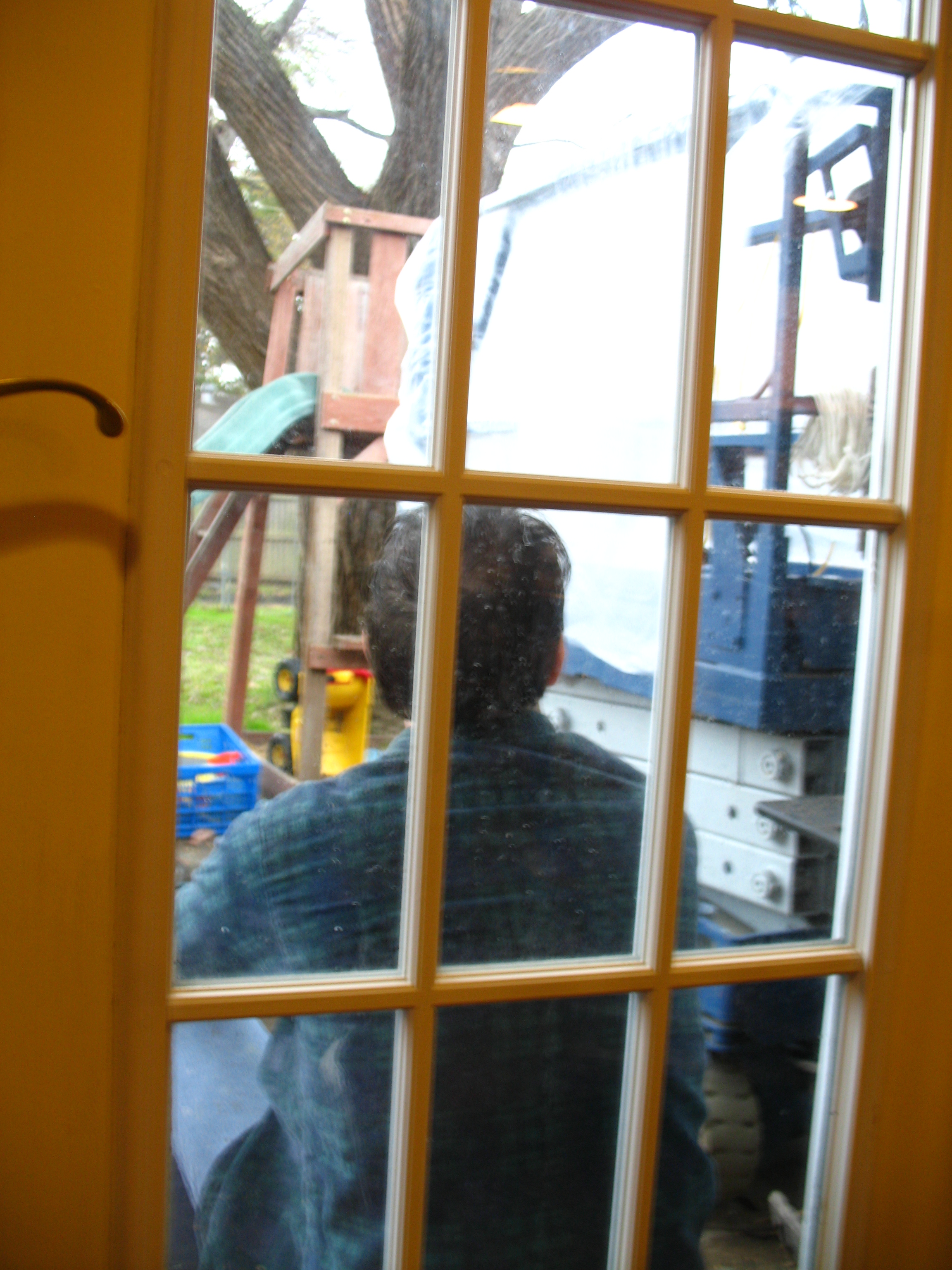 After draping a sheet of plastic over the machine, I sat for a while, staring like a glum soldier at all the work I couldn't do. In the back of my mind I heard a meter running: $100 a day, or about $10 per daylight hour. Tick-tock, cha-ching.

Rust be damned. I found a poncho and rubber gloves I went back up and at it. 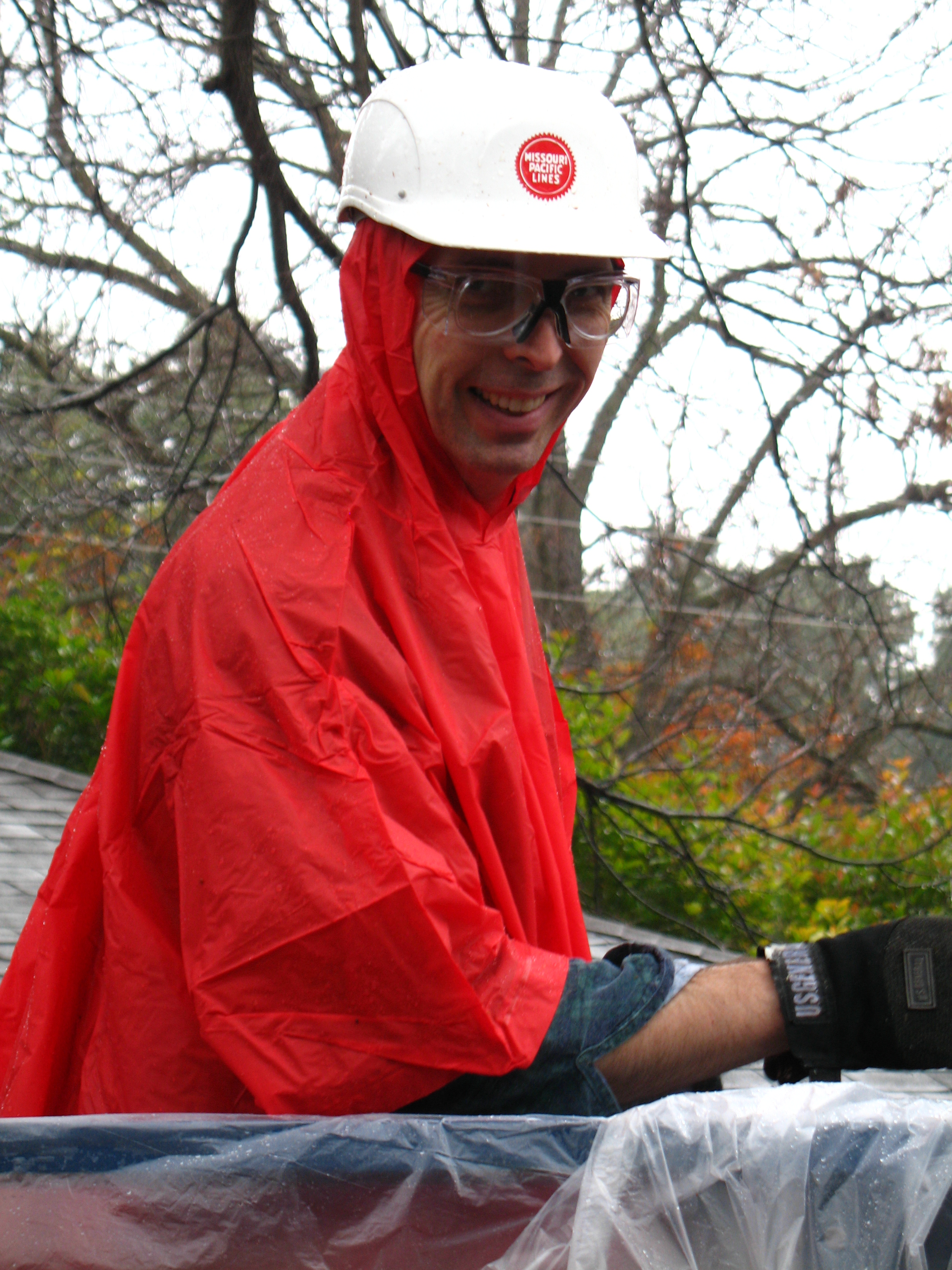 The hard hat wasn't for falling objects; you don't usually cut things above your head. I donned it to keep the poncho hood on tight. But it ended up saving my skull the next time I catapulted myself up the ladder onto the platform, forgetting there was an iron railing around it. Bang.

Once I got chest-level with the first limb (about 22 feet up), I buzzed about a yard off it, catching the piece with one hand. So as not to crack the patio, I lobbed it into the backyard, making an impressive divot. Squeeky captured one on first bounce. 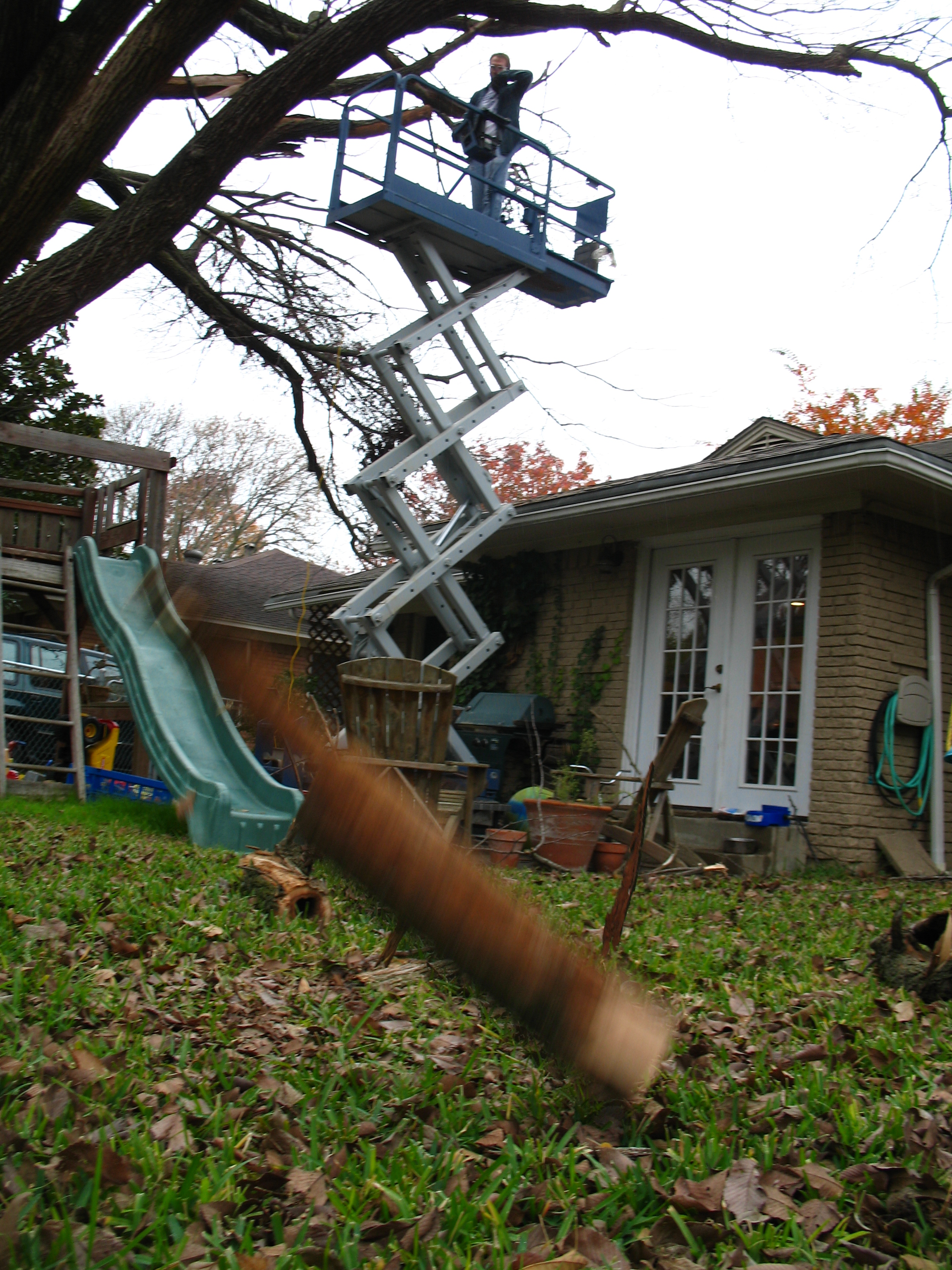 Falling logs wasn't the biggest danger, though; it was the bounce-and-ricochet. Sole casualty: a terra cotta pot (visible above in its last intact moments) that failed to move in time.

In this sort of operation, the chainsaw does all the hard work, but you still have to hold it tight. Very quickly, my hands began to cramp, and that caused the biggest time-burner: stretching and resting my forearms after buzzing through each log.

why not hire a pro to do this? For starters, it's too dangerous. No, really: An insured, bonded professional who accidentally drops a log through your roof still has to file paperwork, and then there's the adjuster, and the bids, and the roof leaks the whole time, and before long, you've taken enough time off from work to deal with the whole mess that you might as well have done the damage yourself. I believed I would take more care to saw these limbs off a piece at a time than any paid professional would—and for about 1/4 the cost.

Dallas has no shortage of paid non-professionals, too. I know because for weeks, they've been stopping by our house in pickup trucks, eyeing the lumber dangling over my roof, eager to sling themselves up there on ropes and hack it down. Maybe I'm a fool, but I would rather take the minimal risk of pruning the tree myself than to pay the liability for injury to one of those guys. Too many hungry lawyers out there.

And you have just witnessed a demonstration of Rittenhouse's Third Law. I gave you three sham reasons while concealing the fourth, correct one:

by the time i was done, HO-scale Lincoln Logs littered the landscape. The backyard looked as if a very polite tornado had passed through, slicing trees into firewood-sized chunks rather than breaking them. 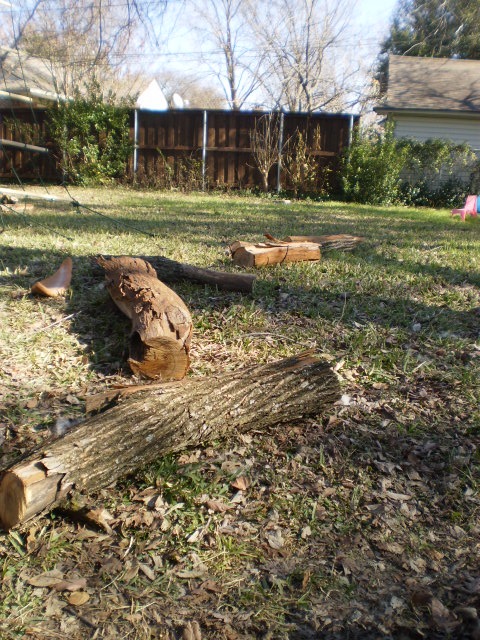 Amazingly, by the time I motored the lift back onto the trailer, no injuries had occurred. Yes, even after taking the kids up 19 feet for a look-around at the neighborhood.

Having whetted their appetite for heights, I followed up the next week with their handmade Christmas gift: a 12-foot rope ladder. 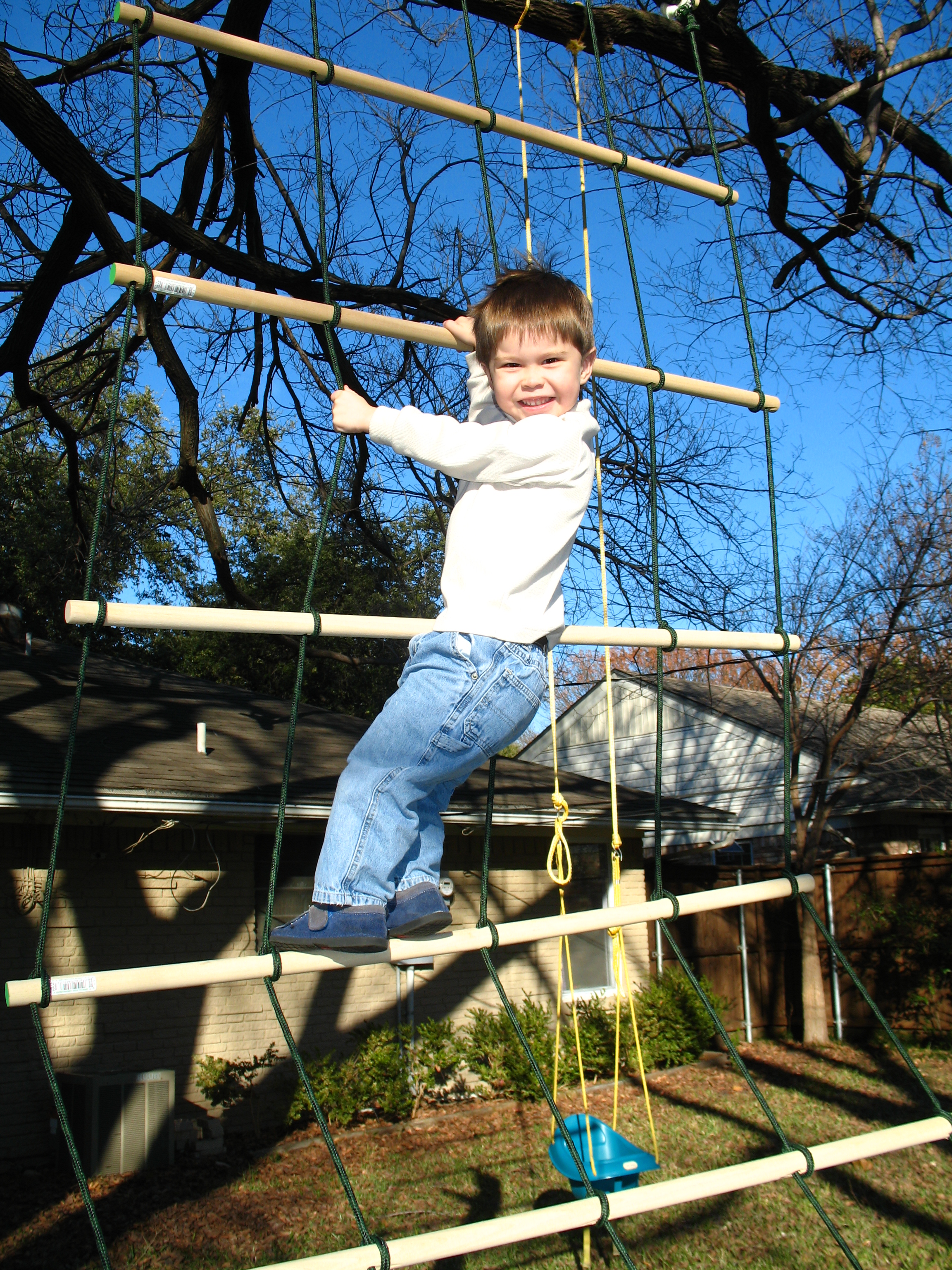 Eight hardwood dowels and 150 feet of rope. A merry Christmas for everyone except the toy companies.