When the Bough Breaks

Part of me thinks that because any nitwit can start a tree-trimming business, then a non-nitwit such as me should be able to trim his own trees.

Having failed to learn from nearly flattening my back fence a few months ago, today I climbed onto the roof to see why a branch from the ginormous elm over our house was touching the shingles. Turns out a higher limb had given way, pressing the smaller one down. I brought saws and clippers with me, figuring on a quickie trim.

Did I mention I'd given blood that morning?

And that my wife was away for a couple of hours?

And the kids and dog were loose in the backyard? 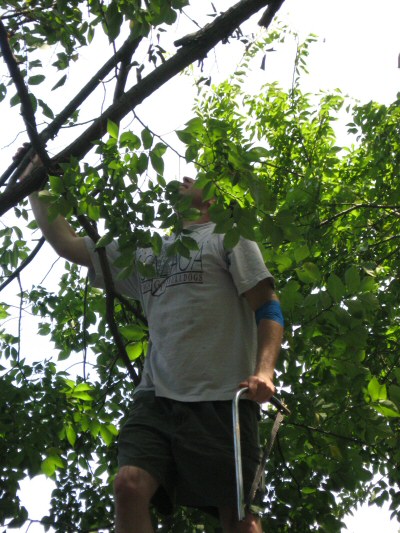 I did wait until Squeeky returned before wrestling loose the end of the bigger, broken branch, which any fool could see might come swinging down upon release.

And here's what happened.

Saved a hundred bucks with that.

And would've made more back from America's Funniest, if the roof had given way.

1 Not sure from your pictures exactly what did happen, but it's made me rethink my pruning plans for this fall anyway.

2 Did you play the video?