Simple Solutions to Your Problems, Part 1

When you're enjoying a concert except for the clown a couple rows ahead who won't sit down like everybody else, you have always had two options:

Ask an Usher for Help
Forget it. These guys aren't qualified to do anything, and they simply won't do anything for you that you couldn't do yourself, such as tap the guy on the shoulder and ask him to sit down. Although they are less likely to get slugged in the face by the guy if he's on dope. Which leads to the other option.

Ask Him to Sit Down
Worse than useless. He won't comply, and if you're lucky he'll barely acknowledge you. If you're unlucky, he'll release a torrent of expletives pertaining to you, your parents, and your friends, then resume dancing. This will draw everyone's attention and the onus will be on you to respond. If you a) deck him, you'll be thrown out because that's the only thing anyone witnessed. If you b) walk away, you'll feel humiliated. So don't even ask.

(Although I've used the masculine-default pronoun here for convenience, it bears mentioning that the offender is just as likely to be female. In that case, absolutely never should you ask her to sit down. Few people are more reckless than a strung-out rockin' chick, and odds are she's with a eunuch who will see this as the perfect opportunity to slug you in the face AND get himself ejected from a concert he didn't want to attend, anyway.)

Today, Rittenhouse will enlighten you with a proven, third option:

Pop Him With a Concealed Rubber Band
Because you thoughtfully packed your left sock with a half-dozen sturdy rubber bands before leaving your house, all you have to do is covertly aim one of them at the offender's back and let loose. (If you're a good shot or if he's wearing leather, aim for the neck.) Then resume your pre-launch position. When the rubber band hits, the victim will grasp at the place of impact and spin around to behold a sea of annoyed-looking faces trying to look past him. Yours will be just one of many annoyed-looking faces. 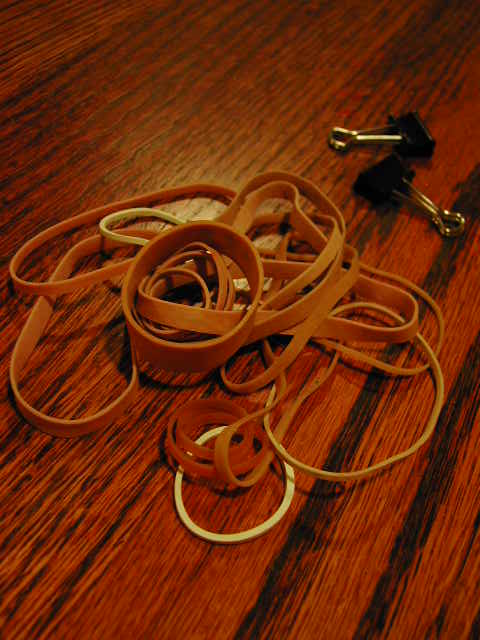 You may have to do this at least twice. Don't worry too much about others seeing you. Odds are, they'll wish they'd thought of it, and will watch admiringly as you take the jerk down, one snap at a time. What you want to avoid is their looking at you for your reaction, which will guide the dancer's eyes to you. So don't react. They'll take your lead, eager to be in on the plan.

On the chance your target's state of intoxication prevents him from feeling this, reach into your right sock, where you've stashed a few small binder clips. (These aren't easy to launch correctly, so you will have practiced beforehand.) If your target fails to sit down after several hits, odds are he's so stoned he can't feel anything. At that point you'll have little choice but to go find a police officer and identify the man as someone who, in the men's room, tried to sell you a dead policeman's badge.

Thanks, and enjoy the show!

Ouch! Who hit me?