Pride Goeth Before a Fall

You never expect to watch someone die, do you?

Oh, there are exceptions. Terminal illness, executions, accompanying a friend to his first open-mic night.

But this one, I didn't see coming.

Squeeky returned from the grocery store with a worried look. Seems there's an old man on the next street, lives alone, house nearly burned down a few years ago, and now he's outside dragging ladders and a chainsaw around the yard, sporting a mountaineer's harness.

You know, the sort of foolishness I would entertain if I didn't have dependents.

I got the message: Go see what the old coot's up to and do what you can to keep him from killing himself. Because, you know, he's a lot like you, 40 years from now.

Okay, I made up that last sentence.

i set off around the corner and found him sitting on his porch with an extension ladder across his lap. He seemed perplexed at how the ladder's rope had gotten misrouted; he couldn't make it extend. But he'd installed the rope himself.

This was my first indication that he wasn't all there.

He introduced himself and looked me over. Must be an engineer, he surmised, some sort of thinking man who knows a little about everything. I allowed that I was a writer, an engineer of words.

Close enough. Then he began a monologue on his theory about photons having mass. Including his detailed description for mounting lasers atop two mountains, using cesium clocks to time the discharges, provided Earth's rotation was factored in. He'd called some sort of research facility and laid out his theory for a genuine physicist.

I figured when he took the plunge, he'd bring the ladder down with him

Right about then I concluded he'd gone 'round the bend, and plotted to head off any attempt he might make to scale the ladder with his chainsaw. I helped him re-thread the extension rope so the ladder would work properly, but when I went to stand it up, he waved me off. You've got affairs to manage, he said. Finish your walk.

He didn't directly order me off the property, so I stayed. It took everything in me not to grab the ladder as he walked it, wavering, over to an enormous red oak.

That limb up there, you see. It's dead. Got to cut it down before it falls on somebody.

The branch stretched across the walkway, but with the number of visitors he probably had, the odds on it actually braining someone seemed remote. But nothing would stop him, now that he had the harness cinched up, the ladder extended, and the chainsaw plugged into an extension cord.

I know that feeling. It's called momentum, and it's the most irresistible and stupid force in Rittenhouse's brain.

i studied the ladder and noted that if I were climbing, I'd want it set back a bit so it was less steep. He took a sidelong look and agreed, dragging it back about four feet. This would lower its height slightly, but he'd be safer reaching a bit for the branch than keeling over just as he got situated.

He tied a rope to the saw and started up, hooking his harness to each rung as he progressed. I figured when he took the plunge, he'd bring the ladder down with him.

He got to the top before stopping my heart completely with the announcement that he'd need to turn completely around and face away from the ladder to reach the dead limb.

With a chainsaw. On a rope.

About then I recognized my only possible part in this scene: I would summon help on my cell phone while administering first aid with ... what? 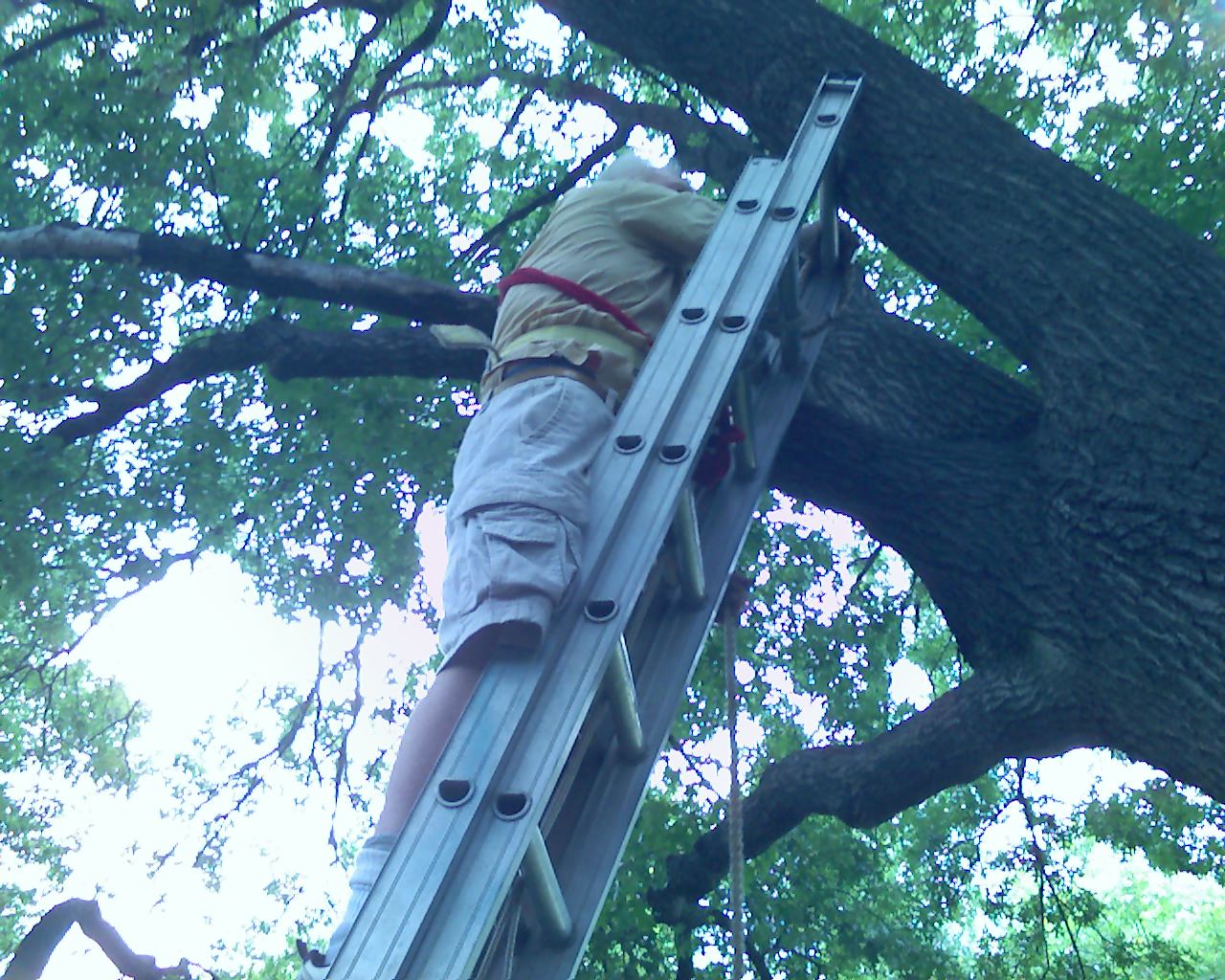 He ground at the limb with his saw until the strain of holding it out at arm's length made him pause. After wheezing for a moment, he went at it again. I could see the chain was making little dust, but a lot of smoke. He wasn't holding it straight in the groove, and the motor strained. On his next break he blamed the dry wood. I allowed it was difficult to get the right angle from where he stood. He hefted the saw up and went at it again.

After another couple of minutes the branch started to crack. By then the old man had the chainsaw extended at the full length of his arm. I could see it coming: the limb would give, the saw would swing down, and the chain would slice into his leg, buckling his knees. And no way could I do anything to break his fall. He would just have to hit the dirt and I'd pray it was soft enough not to kill him outright.

Or, maybe that would be the best outcome. What 84-year-old wants to lie in a hospital bed for weeks while his hip, femur, vertebrae, and humerus knit back together?

When the limb finally gave, the saw did plummet, but it only smudged his pants with oil. I dragged the fallen branch to one side of the walkway while he trimmed up the cut.

Nice of you to stop by, he said. Go along and tend your family now.

I took that as my direct invitation to leave, and headed off. But then I hid by some bushes where I could watch him climb down. Once on the ground, he might let the ladder crash, or drop his chainsaw, but he wouldn't topple over without my reacting.

He made it. He didn't actually die.

But he could have, easily.

This is still a good story, right?

back home, inspired by the old goof, and having just replaced my computer's decade-old CRT with a snazzy new widescreen, I decided to try something ill-advised for your amusement.*

I even tried it again.

Unlike men, monitors stop working before they get hard-headed.

* All computer equipment used in this production was properly disposed of in accordance with local, state, federal, and United Nations protocols.

1 I can sympathize with the old geezer. It isn't pride. It's the stubborn (and sometimes desperate) refusal to face that mortality that's gradually taking everything away from you.