After one week in South Africa I've acquired a lovely accent.

Anglo South Africans sound like well-heeled Australians; Afrikaners (Dutch descent) speak through a unique historical filter, which produces an English akin to that of a Norwegian reared in Quebec: soft Rs with rounded vowels (roondid vewills). I adjusted instinctively so as to sound less like the phonetical American. Now I'm somewhere between Cary Grant and William F. Buckley, Jr. after a strong cigar.

I picked up this affectation in Cape Town, which is a town on a cape. Cape Town's most prominent feature is Table Mountain, which is a mountain shaped like a table: 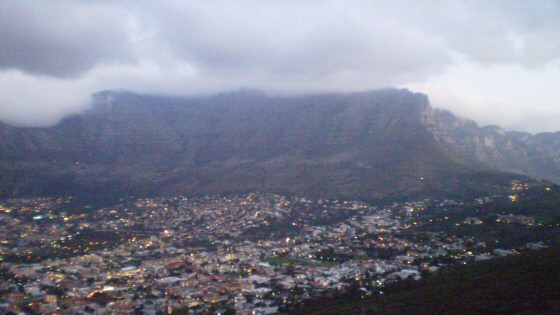 And South Africa is, of course, a republic in the south of Africa.

For the Afrikaners who named everything here, abstraction didn't seem to count much.

Regardless, their city comprises just about everything, as if the ships that used to sail by pre-Suez Canal dropped off 1 percent of their cargo as tribute, including people, cuisine, and architecture. I stayed in a 100-year-old house built by Englishmen and owned by an Afrikaner who drives a German car: 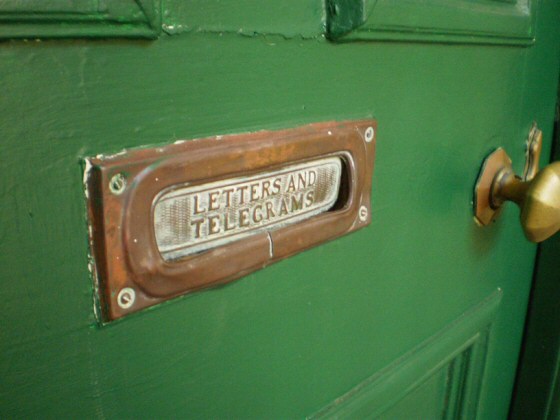 In the marketplaces, store shelves look fairly American in content and layout, and they all take Visa. The waterfront district resembles any recent U.S. seaside development, its nightlife pulsing to familiar pop tunes from the '80s and up. (Way better seafood, though.) One obvious colonial curse is right-hand drive, which makes crossing the street a calculated process for anyone but the British and Japanese. One's instinct to look left just before stepping off a curb can result in a flattening.

Also, they're still on the metric system. I think they do that just to be different.

getting to this part of the world calls for a New Zealand level of endurance. This flight marks the first time I've ever heard an airline PA specifically warn passengers against sleeping on the floor. I spent almost as much time in transit as in country, but that was my own devise, including a Washington-Johannesburg leg that stopped off in Dakar, Senegal, where 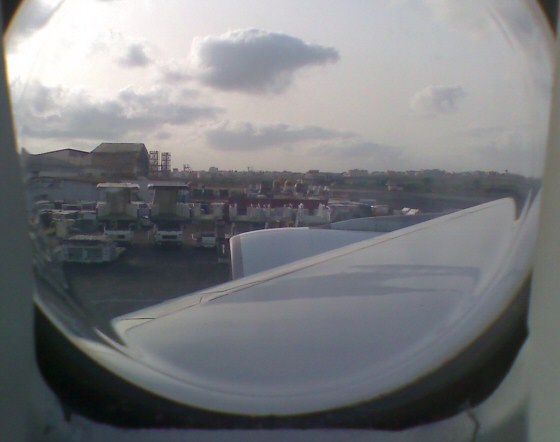 the airport has one runway and no taxiways. As we were two hours late leaving Dulles, the possibility of a Casey Jones finish loomed large in my imagination. To my relief, from my viewpoint in the cabin (illustrated), I saw no near-collisions, nor cargo cults. An hour to refuel, and we were off.

Crossing this much of Earth puts a nasty spin on the usual time-disorientation. Were it simply a matter of adding or subtracting six hours on the body clock, I'd be fine. But the bonus north-south stretch confused me. I felt as if I'd burned two days flying, and I probably did. My only reliable gauge of time passing was the feel of my chin: A day's growth is a day's growth.

for the trip, verizon supplied me a GSM-compatible "world phone" for about $10, all of it shipping. Unfortunately their partner in sub-Saharan Africa is Vodacom, at $2.98 per minute. I resigned myself to texting for five cents incoming, fifty cents out. Fortunately, the time difference meant I could also chat online with Squeeky before my bedtime, which was the middle of her day.

I wondered what Customs inspectors look for in the dishonest

In Cape Town, I watched a guy pull a nifty trick with Skype. He tuned his iPod Touch to a free wi-fi source, plugged in a headset, and called halfway 'round the world for almost nothing. At some point I expect dentists to wire our fillings for stuff like this.

Why was I in South Africa? Well, I was protesting apartheid. Yes, I know it ended in, like, '94 or something. But it's never too late for a little moral vanity.

the return trip seemed to burn less daylight, but I knew better. The trailing sun plays a cruel trick on the perceptions, its effects leavened only by the elation of reaching home again. To pass the time, I read a book and learned how to use my MP3 player, and watched He's Just Not That Into You start-to-finish before realizing it's a chick flick. Even so, being confined to a chair for 15 hours beats sailing for a month.

Snaking through a long line at U.S. immigration under the influences of jetlag and sleep deprivation, I wondered what Customs inspectors look for in the dishonest. (Not that I was re-entering the country with African beef jerky and Cuban cigars: Of course not.) To help us relax, Customs kindly hung enormous LED screens above us and showed a "Welcome to America" video, with heart-swelling music and quick cuts of happy citizens enjoying everyday life all over these United States. When a young woman on horseback raised the Stars and Stripes before a roaring crowd, I suddenly welled up. What would happen if I wept while handing over my passport? Would my agent understand that I was glad to be home, or just point me to the special line for smugglers who obviously couldn't hack it?

Right then I realized how badly I needed sleep. (Also a shower.) The longest hour still lay ahead of me, between Houston and Dallas. Even if I succeeded in eluding Customs scrutiny, my biggest carry-on prize—a bottle of codeine-fortified cough syrup obtained over-the-counter in Cape Town—could have gotten the heave-ho from a TSA official. Too many ounces. Narcotic content? Secondary.

I dropped the accent and glided through, unmolested.

Rittenhouse is home again, and happy about it.