I can tell we're in a recession. Every other commercial on AM radio begins with, "In these difficult times...." and goes on to hawk anything from tankless water heaters to investment advice.

But the most damning evidence of our economy's sorry state is the end of the martini's 20-year run as the indoor beverage of leisure. You cannot enjoy a martini when you—or your neighbor—are unemployed. And Noilly Prat, we hardly knew ye.

no one knows this, but i singlehandedly started the martini craze in 1986. Partly inspired by Berke Breathed's character, Steve Dallas—who often posed behind a then-out-of-fashion martini—and partly fed up with the waist-deep flood of frozen margaritas swamping every boozery in Austin, I initiated the Martini Society at the University of Texas.

We would need a sponsor, of course. I figured I'd aim for the top, so I called the Screen Actors' Guild in Los Angeles and asked for Dean Martin's agent.

The number they provided led me to a portly man smoking a cigar and sunning his white-haired chest at poolside. At least that's the picture his leathery, Brooklyn-accented voice painted for me with the word, "Hello."

I began my spiel, and he interrupted me about one-third in. "Mr. Mah-tin isn't a drunk," he blurted. "That's just paht of his act." Our conversation went downhill from there.

In the age of MADD, the martini seemed barely legal

Correctly figuring I would never find a responsible adult willing to lend his name to an organization of college-age drunkards, I gave up on the club idea and just set about enjoying martinis myself. An old-fashioned drinkers' bar on First Street obliged me, providing my first encounter with a glass of cold gin and three olives. It tasted like cologne. At the time I was dating a much younger girl, and after I'd taken the risk of smuggling her into the place underage, she embarrassed me by ordering a wine cooler. So even though I wasn't really enjoying the exalted brew-mix in front of me, I felt obliged to finish it.

despite the rocky start, i persisted drinking martinis mainly for what they said about me: that I am thoughtful, mannered, cautious, and defiant.

In the age of MADD, the martini seemed barely legal. It is, as noted above, essentially a serving of cold, hard liquor without even so much as an ice cube to dull its wallop. I'd heard the phrase "three-martini lunch," and after my first two-in-a-row I wondered how anyone, after downing three, could find the exit. Martinis are weapons-grade barfare.

Yet they require of their consumer a certain reserve. The glass itself rules out haste. Lacking a handle, and shaped for maximum spillage if jostled, the martini demands a wide berth and a deft touch. Its drinker must not be in a hurry, nor can his coordination suffer as the alcohol infuses him. It may be needless to say that only an accomplished lush should even try one.

Further underscoring its leisure status, on its first encounter with the tongue the martini bites too hard to be drunk quickly. This is true even if it is served—as it should be—near the freezing point. However, the flavor matures as the drink warms up. The olives astringe themselves of their pickling and the essence of juniper cooks off the surface, waking the nostrils. Martinis adopt their customer.

of course, an accomplished martini drinker requires a fine martini, the making of which necessitates skill and commitment.

In the early '90s, Sanders and I discovered a short-lived bar on Lower Greenville, appropriately dubbed Martini's. Its tenders, Danny and Carol, took the art of presentation up a few levels. It was there that I fell under the sway of what I call the Transitory Ice Floe. 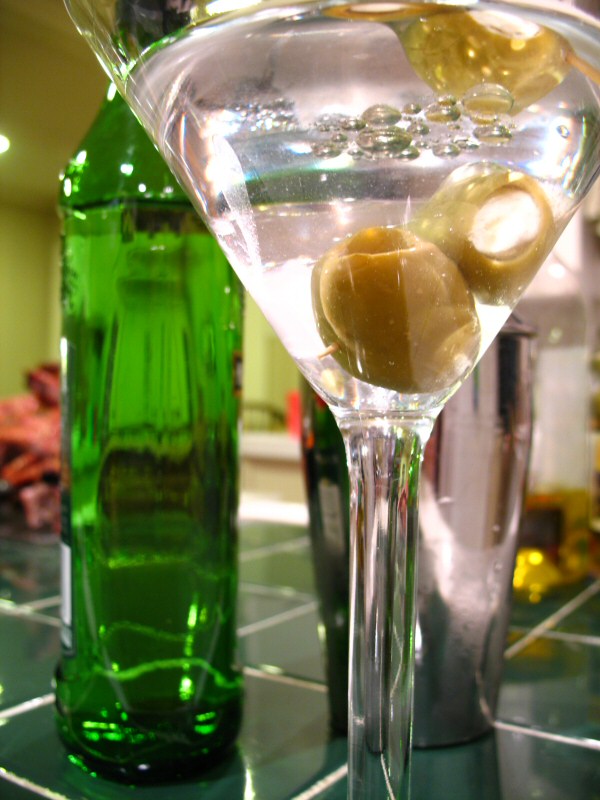 That's the wafer of frozen vermouth that drifts, for a few precious moments, atop the little cone of frigid gin. This phenomenon only occurs when both the serving glass and the liquor stay below the freezing point right up to their meeting. Ideally, the vermouth is drizzled around the inside of the glass—swooshed if necessary to spread it out—followed promptly by icy gin. The sweet wine then rises, molecule-by-molecule, to the top, where it coalesces into a fragile island. Like the flames on a dessert, it's temporal, necessary, and theatrical, and it cannot be consumed. Rather, its effects on the rest of the dish are what matter.

When Danny of Martini's handed the first of these to me, I wanted to applaud. A golf clap, of course.* In this, the seventh year of my martini age, my taste buds had matured, and Bombay Sapphire DNA-matched my chromosomes. To this day, Danny remains my favorite bartender.

my friends began to associate me with my cocktail of choice, and one Christmas a half-dozen sterling-silver martini glasses appeared under my tree. Of course, martinis should never be served in metal (it warms too quickly), so I wrapped red bows around the stems and hung them on the next year's tree. (This does not diminish my gratitude for the gift, of course.)

At one of my places of employment, we had a discreet tradition of Friday-afternoon cocktails, and I began to signal its arrival by walking around the office with thumb and two fingers extended in the classic martini-and-cigarette fashion. It didn't matter whether we had the fixings for such on hand; "martini time" meant casual drinking, and soon enough, bottles began to emerge from desk drawers and the whole staff seemed to loosen its collective necktie. Martini time worked whether actual martinis were served, or not.

not long after that, i married, and my wife and I sought a spiritual home, which in the South especially can jeopardize one's drinking habits. The further one gets from orthodox Christianity, it seems, the more proscriptions one finds regarding life's little indulgences, especially alcohol. This is notwithstanding the fact that to this day, Christians worldwide are still talking about Jesus as Cana's most famous bartender.

Everybody, it seemed, had suddenly become a martini fan

We settled on an Anglican church, close enough to Roman Catholicism to mitigate my fears. The rector, who had suddenly found his parish infused with a multitude of young couples that year, invited all of us over to his house one night for drinks. Imagine my glee when, as soon as we entered, he offered me a martini.

This man had all the accoutrements plus the cryotechnics. I watched, transfixed, as he skewered three olives, laced a frozen glass with vermouth, drew a bottle of Tanqueray from the freezer and poured it over a mixing vessel full of ice. This, in turn, he poured into a traditional, three-fingered serving glass.

A Transitory Ice Floe formed on top as he handed it to me. One wonders if even the guests at Cana had it so good.

in the broad, cultural picture I noticed others adopting the martini's panache. Nineties prosperity needed a symbol, and our cultural alchemists came up with cigars and martinis (a flavor clash, BTW), which dovetailed nicely with the '60s retro fashions already in progress. The movie poster for Swingers featured a 20-something thrusting the familiar V-shaped glass at the camera in the way Eddie Murphy used to brandish a pistol. The film capitalized on the theme of "lounge culture," an ironic name, since the lounge was where promoters put acts that weren't popular enough to fill the main hall. 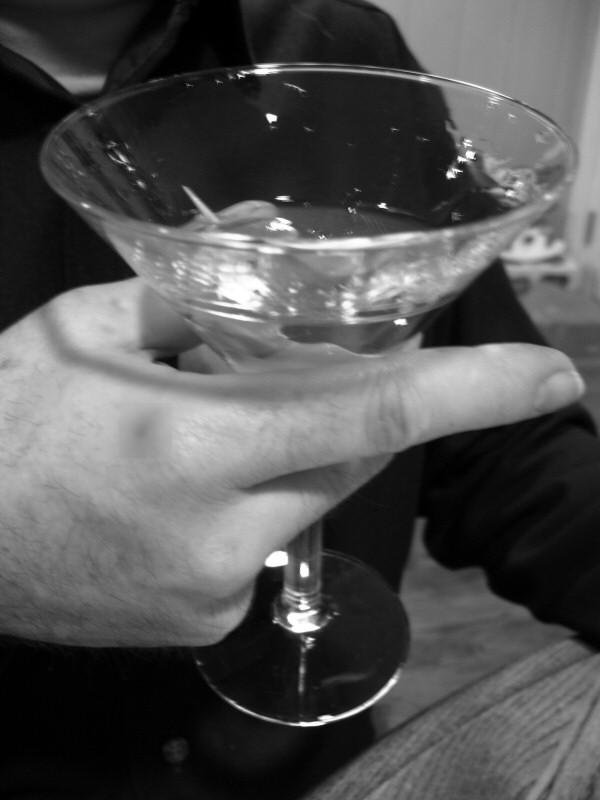 Locally, another Dallas bar flourished as Martini's fell, calling itself Martini Ranch, unfortunately with a drink menu too vulgar for anything but this footnote. Often, vulgarity is needed for popularity. And by the middle '90s everybody, it seemed, had suddenly become a martini drinker.

I saw all this as flattering, since I'd started the whole craze a decade prior and this is what the pop culture threw up in its desperation to latch onto a trend.

Yet, none of it could come close to the effortless cool of Dean Martin, the original. I don't know whether he invented the three-fingered, cigarette-and-glass pose, but he owned it. And the rest of us can only wish we were that smooth.

Noilly Prat's abandonment is, I fear, just the beginning of the martini's second demise. I may not live to see its next revival.

Whatever. I'm a father now. I'm not supposed to be hep. In fact, I'm comfortable being not hep.

* When Martini's closed, Danny went on to 8.0 and then to Al Biernat's. Carol's whereabouts are unknown, which is too bad, because at least to Sanders and me she is well-remembered. Martini's bartop had a cutout in the middle where a dozen glasses rested upside-down on a bed of ice. When the bartender lifted a glass off, a conical ice formation remained, for which there was no name. Sanders and I dubbed them "carols."

1 I could almost taste them. Very evocative