Squinx, the elder daughter, has a fascination with all things space-related. She can pick out constellations and elaborate on the finer points of space dust and cosmic rays.

Why she cannot see her socks on the living-room floor, I cannot explain.

In any case, when I heard the annular eclipse would pass through Albuquerque, I packed up all the Rittenhousen for an adventure. We would meet Aunt #2 (we have 5) in the early afternoon, have lunch, view the eclipse, then crash at an airport hotel.

A winning plan, with the only variable being how much of Albuquerque (and, for that matter, North America) we would have to compete with for a good viewing spot. Surely, Bernalillo County would make room for us.

Our first task on arrival would be to test out the hotel's beds.

Next, the pool, ice machines, and elevators. All inspections: passed.

We met Aunt #2 at Chipotle, near enough to a college campus to see that the practice of "gauging" (that's French for "gouging") has resulted in some students' ear piercings opening large enough to permit thru traffic.

(Honestly, what happend to tattoos? Or rollerblading, for that matter? It's getting more invasive as time progresses.)

As the 4 o'clock hour approached, we would need to find a good spot to view the eclipse. Really, anyplace but a tunnel would work, but I'd been combing the local papers all day hoping to find someplace with an educational bent, so the kids might come away learning how an eclipse only happens every great once in a while, yet is predictable. A flight museum on the east side of town promised a pair of safety glasses in addition to live narration, so we set forth. And here we got a little lesson in why things happen as they do.

On our way out of Chipotle, the sling that Squeeky planned to hold Twiddles in for the viewing got soaked by a loose cup of water. The prospect of balancing a 2½-year old baby on her hip for the rest of the afternoon grated on Squeeky, so she hung the sling out the window of our rental car to dry, at least for the drive to the museum. As we arrived, she lowered the window, and at that exact moment an official on the ground announced via loudspeaker that all the museum's safety glasses had been distributed.

We would have less than 30 minutes to come up with a Plan B.

I dropped all the Rittenhousen at a nearby park and punched up a list of the closest auto-parts stores on iPhone. Racing to the first one, I scored a roll of limousine-black window film, then charged back to the park with 10 minutes left until the moon would begin to intercept the sun's broadcast directly over our little patch of real estate.

Between Aunt #2 and Nephew #4 we came up with a blade sharp enough to zip through the window tint without wrinkling. We figured six layers was enough to protect our eyes. 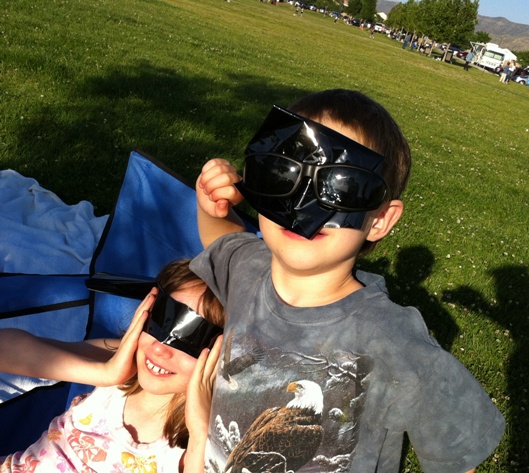 We had plenty enough film left over to pass strips around to others who hadn't planned any better than we had.

A photo of the eclipse itself would prove far beyond our equipment's capabilities. Here is something from National Geographic. It's exaggerated—the sun-moon combination didn't look nearly that large—but the photographer did capture the show's magnificence. You simply couldn't see it without an eyeshield; all you'd see otherwise was a strange sepia tone to the landscape around you. The color seemed atmospheric, as if a pall had been cast, gradually.

So, back to the metaphysical lesson. If that cup of Chipotle water hadn't been spilt, we'd not have been likely to have our car window down when the announcement was made outside the flight museum, and once we'd gotten parked and in a position to understand that Plan A was doomed, we might not have had enough time to carry out Plan B.

And all this was set in motion a billion years ago, when the moon began to spin around the earth.

I'll try to remember that next time I'm tempted to curse over plans gone wrong.