'Tis the season when the cold morning air carries the roar of traffic to Rittenhouse Estates from the Interstate, two miles distant.

Texans know summer will resurface several times before winter finally lays its miserable wet self upon us for good. Even the individual days arc unpredictably: We'll don jackets for the morning commute, then forget them at the office because by lunchtime it feels like May again.

Then, two days later, a blue norther will sweep through mid-day, and we'll be grateful we didn't take that jacket home earlier.

Perhaps my excitement is rooted in those times when kids goaded their parents to order junk out of magazines, which always required something called a "money order" and six to eight weeks for delivery. A boy could pass puberty before that package arrived, but the anticipation built each day.

And even though I order stuff all the time now, the thrill remains. As you can see.

Just lately, though, I reverse-engineered the same thrill for somebody else.

squeeky bought a cradle back in 2001, before I was ready to acknowledge we were due to start making children. Its arrival at our house made for a story in itselfâ€”the way her girlfriends, who had accompanied her on the antiquing trip, grinned at me like cannibals as I stood behind their open van, contemplating my fate.

But soon after Squinx's arrival a year or so later, we found the cradle worthless: Daughter would not rest in it for one minute without shrieking.

We didn't bother trying with Little Roo, figuring these to be the sort of children who prefer to sleep atop a human. So the cradle sat in our bedroom collecting dust and barking shins for seven years.

Finally, we decided to let it go. As it appeared too big to ship, we posted pictures on Craigslist and waited for the next romantic to come along.

Of course, the only soul who took interest sent an e-mail â€¦ from Alabama

at first, i figured the inquirer had just a passing interest. Once I got her a packing-and-shipping estimate, she'd forget it. But a funny thing happened at the UPS Store, and at FedEx, and at the Post Office: Nobody wanted to ship this thing because it went off the scale, dimensionally.

I finally called a freight company and threw them the numbers. Of course, we'll ship it, they said. For an ungodly sum, and we won't pack or insure it, either. I shrugged and relayed their quote to Alabama, tacking on $40 for my trouble.

I wondered if the box wouldn't explode a few hours later

Ever feel like a dog that's finally caught a squirrel, then doesn't know what to do with it? That's about how I felt. I hadn't really expected anyone to want this thing, nor to pay what we'd paid for it, plus what it would cost to transport across three states, but here I was. How on earth would I actually get it there?.

I found a big-enough cardboard box atâ€”where else?â€”a cardboard-box store. Sizing the two up in my garage, I briefly considered wrapping the cradle in plastic then filling the box in with expanding foam, but wondered if the box wouldn't explode several hours later. Instead, I raided my office trash for excelsior and styrofoam, then dedicated several hours to spatial thinking and experimentation. I would have to cushion the edges so that the inevitable jostling wouldn't pit cardboard against woodâ€”a fine finish always loses that battle.

Yet, to pack the cradle in there tightly would risk breakage if some monkey decided that two feet was a reasonable distance to drop it. A loose pack would have to do.

Here's the cargo, standing on end. The mattress would prove useful padding inside the top. 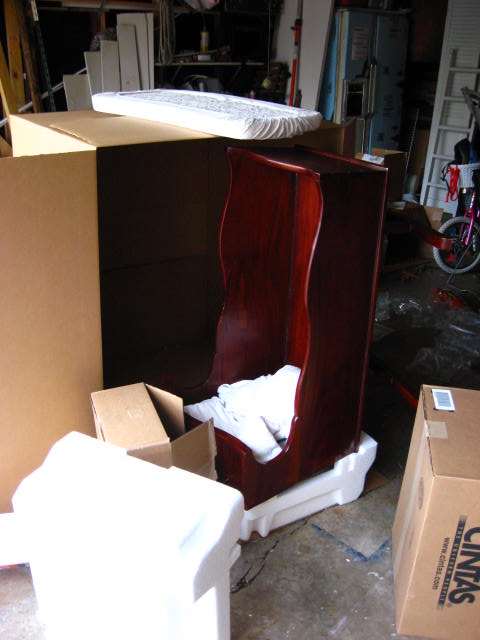 And the final form of things, with bubble wrap around the legs. 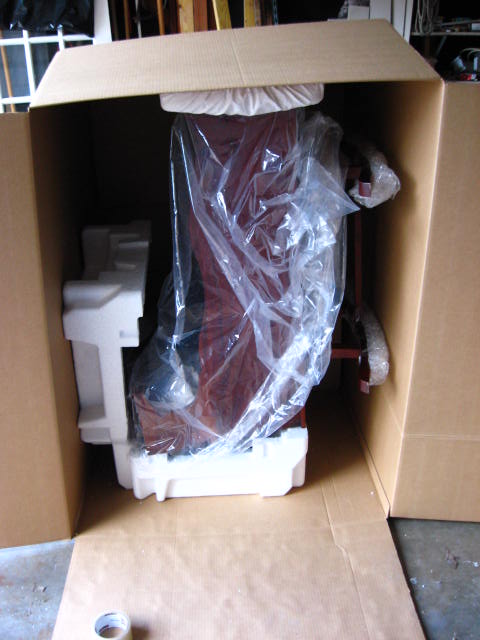 The shipper would only pick up at a business address, so here's how I got it to the office. 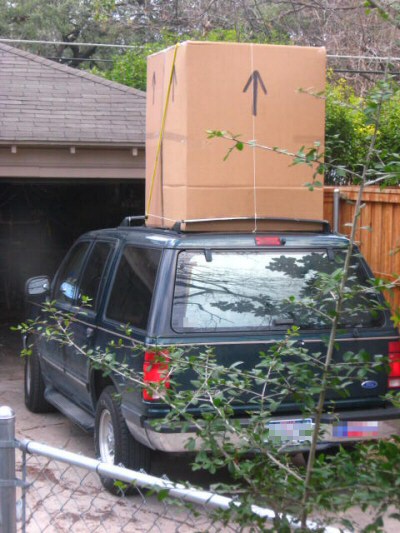 Power lines made me a bit nervous, as did traffic lights. I drove at school-zone speeds to avoid rollover.

Within a few hours a guy showed up at our loading dock and took possession. I said a prayer and went back to work. I'd already cashed the woman's check, and with no insurance on the package, I was at the mercy of maybe a dozen unknown handlers between Dallas and Birmingham.

She e-mailed me two days later, thrilled with her new piece of furniture.

So, a happy ending ... and happy beginning for her grandson.

I hope he likes getting stuff in the mail, too.